Blogging A to Z, R is for Zombie Reality TV

R for Blogging A to Z is for Reality TV 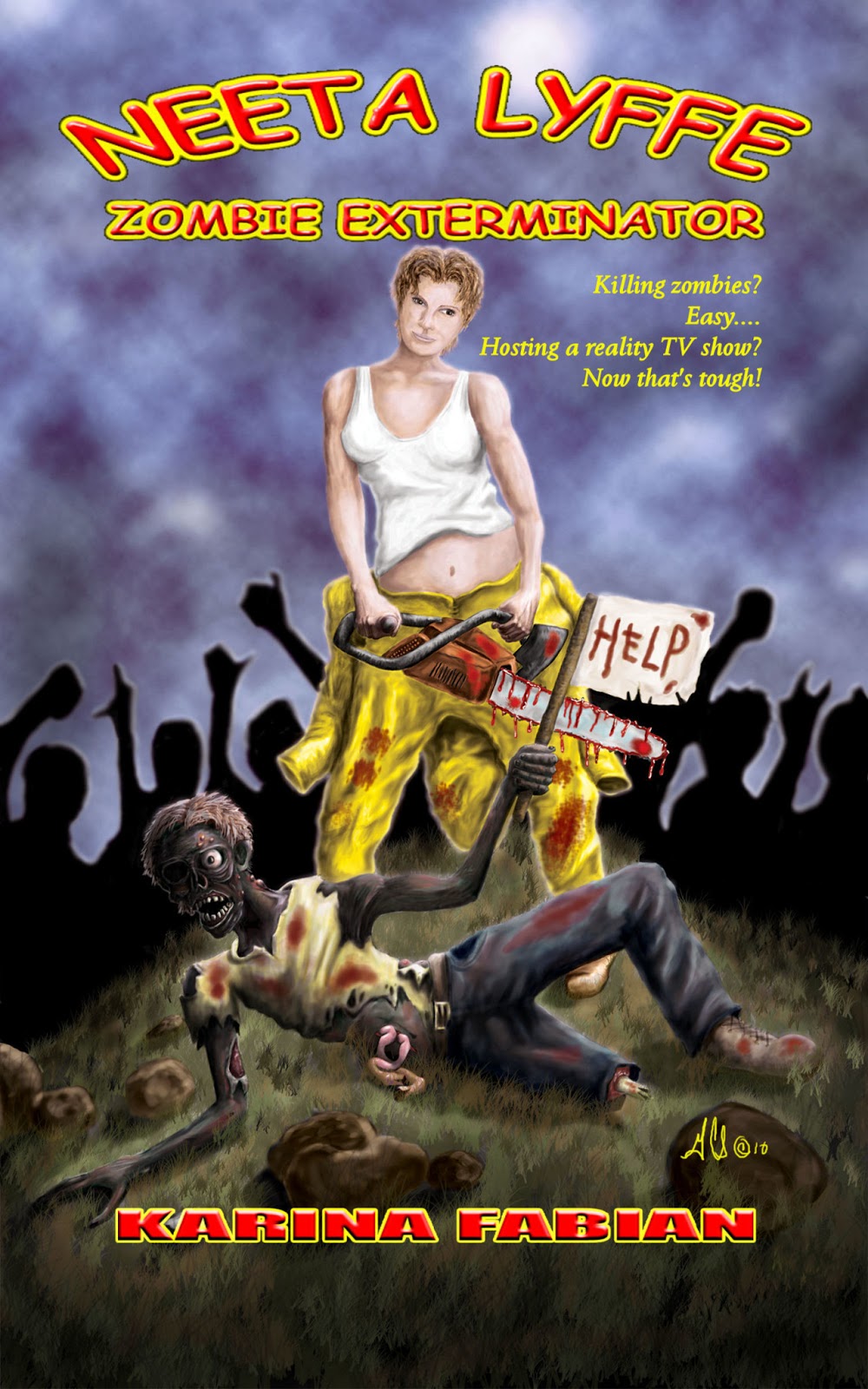 If we are ever so unfortunate as to have a zombie problem, I'm sure that soon enough, Hollywood will get involved.  So when I was asked to write a novel based on my zombie exterminator, Neeta Lyffe, it was a natural progression to put her in a reality TV show training up apprentice exterminators.  Of course, by the 2040s, realism won't be enough; it will have to be real.  And that means real stupid gets real dead real fast.  Here's how Neeta, her plebes, and the director Dave of Zombie Death Extreme handle it when one plebe, Bergie Eidelberg, fatally fails the episode's challenge.


Much as Neeta hated to admit it, Dave had been right about the place.  Eidelberg would have loved the twilight memorial on the beach.
The location crew found a nice little spot above the tide line, not far from a scrubby overhang.  Dave sent people ahead to rake and clear the area of trash, animal debris and dead seaweed, and to move the federally mandated signs warning of the many dangers of swimming in the ocean (including cramps, chills, stings of naturally occurring wildlife that are really quite shy but have every right to defend themselves, shark attacks, porpoise buttings, and the completely understandable but nonetheless unsanitary bathroom habits of the ecologically rightful inhabitants).  The four-by-four signs took two people each to move, but Dave insisted that their reflective surfaces would interfere with the lighting.
Just outside the ring of logs, they'd set up a shrine to Donald "Bergie" Eidelberg: his favorite surfboard rose from the ground like a California tombstone.  The production crew had enlarged a photo of him from the first episode and framed it with leis, which they hung on the board.  They'd spread one of his beach towels in front it, and everyone had set some item on it that reminded them of him: A canister of Sex Wax; ironic, considering that he claimed celibacy was absolutely necessary for champion surfing.  The sunglasses Neeta had refused to let him wear into the warehouse, not that it had helped.  The surfing trophy he’d kept by his nightstand--second place.  The painting he'd been working since the beginning of the show; they thought it might be a wave.  The keys to his classic 1978 AMC Pacer; he'd bragged that once he won the million, he was going to give it the overhaul it deserved.  Lawyer Larry, whose real name was Eugene, had already put it up for auction on eBay, with the proceeds to go to the Retired Surfers Association, in accordance with Bergie's will.
Neeta and her plebes had trooped to the site, accompanied by the filming crew, just as the sun hesitated over the horizon, like a swimmer preparing to enter a cold pool.  As the sun dipped, then sank into the horizon, they ate hot dogs, drank sodas and shared stories about their fallen teammate.  Roscoe waxed poetic about his legs; Katie admitted to a secret crush.  Gordon laughed how Bergie was going to teach him surfing when this was all over in exchange for learning how to dum-dum bullets.  LaCenta rolled her eyes and declared him a damfool, but her eyes misted when she said it.  Spud, silent and thoughtful, said he'd go visit Bergie's mom with Neeta before heading back to Idaho, and Nasir offered to join them.
Within the circle of logs, the campfire roared merrily, bathing Neeta and her plebes in its warm light.   Soon, they'd each light a candle from that fire and hold it close as they discussed the day's tragedy.  Dave was having paroxysms of joy over the effect.  Neeta wondered if he'd gotten permits, planned to pay the fines, or had bribed someone to arrange this cozy beach scene.  Since the California Carbon Footprint Reduction Act, such "eco-destructive luxuries" like campfires had been banned.
From her log apart from the others, LaCenta was complaining.  "All I'm saying is that my family lost everything in that fire and then the judge fined us for starting it, but oh, let the Hollywood man want 'authenticity,' and they turn a blind eye."
Roscoe sighed heavily.  Perched on the log with his feet flat on the sand, knees together, wrists resting on knees, wearing a tailored white t-shirt and matching boat shorts, he looked like an out-of-pace model.  He insisted white was the Chinese color of death and symbolized purity and nobility of the spirit, but Neeta suspected he just wanted to stand out in the dim light.
"Give it a rest, Placenta," he sneered.
"It's LaCenta, and if you can't come up with a more imaginative insult, Roscoe, you should just shut your hole."
"Which one, honey?"
"Stop it!" Katie shrieked.  "We're supposed to be saying goodbye to Bergie!" She buried her head into Spud's shoulder and sobbed.
He patiently reached into her backpack and handed her a tissue from the boxes she'd brought with her.  They'd started the fire using the dirty ones as kindling.
Good ol' Spud.  Calm, dependable, and about as exciting as potatoes.  He could be good at this job, Neeta thought.  Yet every week, Dave complained about his low ratings on the online polls.  "Sure, people love potatoes!" he'd ranted at one writing session, "but who really thinks about them?"
Gary spoke up.  "They like them with something.  Cheeseburger and fries."
"Steak and potatoes," Wang added.
Dave grinned that maniacal grin.  "Potato and gun!  Yes!  Yes!  I'm seeing it!  So what do we hook him up with?  Who is our 'steak'?"
The next day, Neeta had walked by LaCenta's trailer just in time to see Wang go flying headfirst out the door.
"I may have been raised in the hood, but I ain't no Hollywood whore!" she shouted.
Neeta had rounded up Gordon, and the two of them had a found Dave for a sandwich and a talk.  Rather, Neeta talked while Gordon held Dave sandwiched between himself and the wall.  Afterward, Spud found himself teamed with Gordon as a weapons master apprentice, none the wiser of the behind-the-scenes dealing.  Dave had had to settle for potato gun.
Now, thanks to Bergie's death, it seemed Dave might get his steak and potatoes, too.
She was really growing to loathe Dave.