Today is the Letter E for the 7th annual A to Z Blog Challenge in April!


Today is C is for Cursed Objects 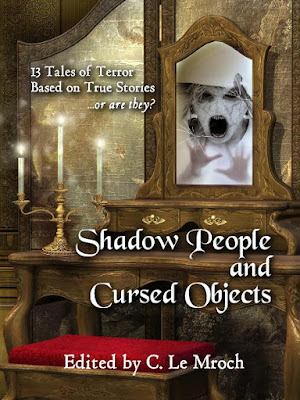 Chris has very graciously allowed me to participate in the A to Z Blogging Challenge this year with a guest post. She even let me pick which letter I wanted!
Thanks, Chris! Happy to be here!

Why the letter C?
Well, I have a new anthology out: Shadow People and Cursed Objects: 13 Tales of Terror Based on True Stories…or are they?)

S was taken or I would’ve picked that one. However, since there’s also a prominent “C” word in the title, I decided that would work too.

What’s Shadow People and Cursed Objects About?
Great question!
It’s a baker’s dozen of tantalizing tales of terror based on true stories…or are they? (In retrospect, “T” might’ve been a good letter to choose too, eh?)
Anyway, Shadow People and Cursed Objects is a reader participation book. At the end of each story this appears: “Based on a true story…or not? Find out in the Truth or Fiction section.”
The Truth or Fiction section of the book is where all is revealed.
The fun is trying to decide if the story was based on a true story or not…before you look to find out the answer. (No fair peeking. It’s bad luck to look ahead. With a book filled with accounts of ghosts and cursed objects, you wouldn’t want to take your chances, would you?)

Includes 6 1/2 Cursed Objects Stories
There are 13 stories in Shadow People and Cursed Objects. They alternate between ones about haunted objects and ones about ghosts.
The anthology starts with a cursed objects story: “The Busby Chair” by Alice J. Black. It’s about a cursed chair rumored to bring sudden death to anyone who sits in it, and a boy, desperate to impress his friends with his bravery and bravado, who tempts fate.
Then there’s “Bye, Bye, Blackbird” by Emerian Rich. It’s about a young woman who is enchanted by a necklace, but instead of bringing pleasure it brings her nothing but trouble and heartache.
“The Black Flowers” by Barry Charman tells the tale of an empty coffin made from the wood of a hanging tree that needs burying –but the coffin might not be empty after all.
S. Mickey Lin takes readers through a haunted looking glass with his tale, “Lady Winters’ Mirror.”
“Doomsday, Every Night at Five” by Evan Dicken appears mid-way through the book. It combined both ghosts and cursed objects with a story about a little girl, a television set, and her dead grandfather who haunts it.
An audience member ventures backstage to meet the magician and his life-life dummy, who she learns is really the puppet master and not the puppet in Carl Barker’s “Murder for Dummies.”
Then there’s my story, “The Mannequin in the Middle of the Road.” (Written as C. Le Mroch, though, my horror nom de plume.) When a mannequin proves to be a road hazard, a conscientious driver puts him in his trunk –which proves to be a mistake when the mannequin starts banging to be let out.

Shadow People and Cursed Objects Giveaway
Since Chris was so kind to allow me to guest post as she participates in the A to Z Blogging Challenge, I figured the polite thing to do was not to show up empty handed.
I set up an Amazon Giveaway for a paperback copy of Shadow People and Cursed Objects. To give you an even better chance of winning, I’m only posting the link here. Here it is: https://giveaway.amazon.com/p/e53e58775af0a4ec
All you need to enter is:
1.     *  An Amazon account, and
2.     *  To watch a short video. (It’s the Shadow People and Cursed Objects book trailer, which was created by Ken Teutsch. He has a shadow people story in the book, “The Storm on Promised Land Road.”)
There’s NO PURCHASE NECESSARY. (Just the investment of 43 seconds of your time to watch the trailer.)
The giveaway ends Apr 6, 2016 11:59 PM PDT, or when all prizes are claimed. See Official Rules http://amzn.to/GArules for more.
**  Good luck if you enter. And if you win, I hope you enjoy the book. Be sure to leave a review with your thoughts.

Email ThisBlogThis!Share to TwitterShare to FacebookShare to Pinterest
Labels: a to z, cursed objects, horror