#AtoZ - P is for Pockets of Darkness #horror

Today is P for Pockets of Darkness 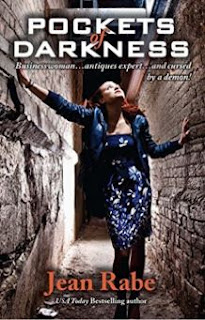 Welcome to multi-published author Jean Rabe, who's talking horror and sharing an excerpt of her latest, Pockets of Darkness. Be afraid. Be very afraid... and be sure to comment for a chance to win a copy of one of her many books!

Dark Days Ahead
By Jean Rabe

I hadn’t started out to write a horror novel. It was supposed to be light, irreverent urban fantasy. But it kept getting darker.

And so I’d inadvertently written a horror novel wrapped in the dress of an urban fantasy. And I’d like to do it again.

Here’s the beginning of Pockets of Darkness, available from WordFire Press.  (Contains some adult language.)

Yeah, I think I gotta write me another dark book.

Bridget O’Shea is a mother, a successful business woman, an expert on antiques…and a thief, a damn good one. But when she steals an ancient relic from a Manhattan apartment, she acquires a curse in the form of a Sumerian demon. The demon wants something from Bridget, killing people she cares about to force her cooperation, and it will continue to kill unless she meets its demands. Next in the demon’s sights? Bridget’s teenage son. Bridget must learn to communicate with the demon, divine what it wants, and satisfy it to keep her son alive. But she soon discovers that mollifying a creature from the pits of hell could damn her soul and send the world into chaos. Bridget never wanted to be a hero. That’s for suckers. But now, she has no choice. She has to find a way to best the beast and keep its kin from reemerging, or . . . well, there really isn’t an “or.” She has to win.

Elijah rocked back on the heels of his Brunello Cucinelli wingtips. He drew his collar up and fixed his gaze on the weathered sign hanging slightly askew above the door: Don’t Judge a Book . . .
By what? By its cover, the saying went.
His mind replaced the ellipsis with something more fitting: by the neighborhood it’s sold in. This was an abysmal borough, and the buildings—this one in particular—ought to be condemned. The structures were grimy shades of gray, separated here and there by darker charcoal smudges of alleys. Despite the cold wind that deadened his senses he smelled grease and dirt and the biting odor of piss.
Elijah couldn’t remember when, if ever, he’d been in a part of the city so beat down.
A siren’s wail sliced through the air. Always he could hear sirens in the city. It just seemed a little louder here, more desperate. There were other traffic sounds, too, but from beyond his line of sight—the constant shush of tires against pavement oddly snowless for the middle of January, the blat of horns. There’d been only a couple of cars trundling along in this block, more rust than paint, their occupants eyeing him, necks craning as they drifted past. Not a single cab. He’d taken one from Hudson Street, but it dropped him off five blocks to the south. He’d written the address of this bookseller wrong, transposing the first two numbers, and so he’d had to hoof it for a stretch.
Don’t judge a book by the absolute utter dump it sits in, he mused. After several minutes he had made no move to step inside.
Elijah shuddered when three teenagers swaggered past, one purposefully elbowing him to set him off balance.
“’Scuse me,” the youth laughed.
The trio stopped a few doors down and huddled in conversation; the one who’d bumped him had a flat, angry face and gave him a serious up and down. Elijah knew they were talking about him.
With any luck they’d mug him. His appearance practically screamed: Come and get me! Middle-aged white man in a sheepskin-lined overcoat, designer shoes, thick leather briefcase at his side that looked a few decades out of date, but by its bulk promising something interesting inside. He looked down at the briefcase and sneered.
Elijah wore a Rolex. He worked his arm so the coat sleeve came up to show the watch. It was 5:45. According to a placard nailed to the door, the bookseller closed in fifteen minutes.
Please come and get me! he silently begged. Dear, God, let them come and get me.
He’d been mugged a few times this month and emerged with only a handful of stitches and bruises that he’d hid beneath his expensive clothes and that had cleared up quickly. Just last week he tarried at a Brownsville subway stop in the early morning hours when some homeless looking man took the bait and beat him up. Didn’t take the watch, or the briefcase, only his wallet and the virgin wool Armani jacket he’d been wearing at the time.
He didn’t file a report with the police, not then or the times before. The hoods were only after his cash on all those occasions, and he never carried more than a few hundred. No serious damage done, no lingering wounds or scars. Didn’t muggers recognize a Rolex?
He’d tried the ploy again just two nights ago, this time braving one of the subway stops in Washington Heights. Two muscle-bound gang members with matching tats had been intent on taking him up on his unspoken offer: Come and get me. But a cop appeared on the steps, and they veered away. Tired, Elijah had called it a night.
This trio? They might prove his salvation and negate the need to enter the bookseller and shell out a considerable amount of cash. He could weather one more beating, couldn’t he?
“Come and get me you sons of bitches,” he whispered. “Come and fuckin’ get me. Come and take it all, assholes.”

** Comment to win a copy of one of Jean's books. What's your favorite horror character and why?  Be sure to leave an email to contact you.
Posted by CA Verstraete at 12:00 AM

Email ThisBlogThis!Share to TwitterShare to FacebookShare to Pinterest
Labels: a to z, horror, jean rabe