Today is the letters X and Y for EXceptional YA fiction 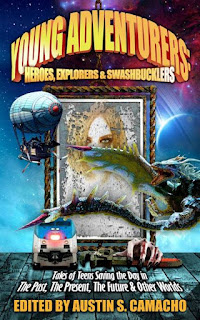 The fun of developing a character is then finding new adventures for them to get into.

That's the case with my part-zombie girl Becca from GIRL Z: My Life as a Teenage Zombie.

In this case, I had her not only fighting off a few full-zombies, but facing one of her biggest fears - dogs. And how better to do it than have her come face-to-snout with a cute little white German Shepherd puppy.

When the puppy is lost, Becca has to face that fear and solve a mystery of where other dogs have been disappearing to in "Puppy Love and Zombies" by C.A. Verstraete  in the anthology, Young Adventurers: Heroes, Explorers & Swashbucklers.

Most of us had been too busy surviving, and trying to avoid the roaming hordes of ravenous undead, to notice something else was going on.
Yeah, like the rest wasn't bad enough? It was, but this new thing nearly did what the mutated Z virus didn't already do—kill me.
The morning started great when my Uncle Franco brought this beautiful, year-old white German Shepherd puppy over for us to meet. Unlike my first dog experience (more on that later), the puppy bounced around, played, barked, and most important, didn't make me afraid.
Call it love at first lick.
For once, I forgot all the zombie stuff that had plagued me for the past year. I threw a ball and laughed at how she ran and brought it right back. “Ooh, she’s so cute and smart! I’m going to call her Fluffy! Is she mine? Can I keep her, can I?”
I begged and begged, though I knew my Tia (Spanish for Auntie) Imelda already loved her as much as I did. Then we heard the yells outside. My uncle's cries of “look out!” came too late. My cousin Carm opened the door and jumped back at sight of the chaos in front of our house. Our neighbor Mr. Thompson screamed, “go back in, shut the door!” as two of the zombies came at him.
In the last few months, most of the full Zs had been rounded up and exterminated, but a few wanderers like these kept us on our toes—at least they should’ve. My uncle grabbed his gun and fired at the monsters. The excitement was too much—the puppy panicked and pulled out of her collar. I screamed as she darted out the door and ran off in the opposite direction.
“NO-NO!” I yelled and tried to catch her, but she was gone. I would've followed if not for the strong arms of my cousin and aunt holding me back.
“No, Becca honey, let her go,” Tia implored. “She'll come back or someone will find her.”
“No, she won't,” I cried. “She won't!”
And she didn't.
*
My aunt's friend Amelia from down the street stopped by later and let us know my suspicions had some truth to them. As a nurse, she had a way of hearing what was going on in the community.
“Sure glad they got those creatures.” She gave a mock shiver. “The National Guard’s been doin’ a fine job of watching out for stragglers, so I can’t imagine how those two made it into town.”
I shrugged and tried to be polite, but my heart wasn’t in it.
Amelia reached out and patted my chin. “Oh sweetie, I wanted to see how you're doing. I saw that cute little dog of yours run by my house. I tried to stop her, but couldn't catch her.”
She paused for a minute. The concerned look on her face did make me pay attention. Amelia was a sweet, caring lady, who also told us when she heard something we should know about. What made her even more special to me was that of all the people in our neighborhood, she’d been the only one who welcomed me back home after I’d been infected. She treated me the same as always, like she was my aunt.
“Amelia? Is something wrong?”


The older woman paused a second, then leaned in, and looked me straight in the eye. “At first I didn’t think much of it, but now, well, I’m not so sure. Two of my other neighbors' dogs are missing, too. One ran off and never came back. He told me his dog never went further than the house next door before this zombie thing hit. My other neighbor said her dog was in the yard and when she went to call her in, the dog was gone, and the gates were still locked.”
Posted by CA Verstraete at 12:00 AM

Email ThisBlogThis!Share to TwitterShare to FacebookShare to Pinterest
Labels: a to z, dogs, zombies