Welcome to the start of the 7th annual A to Z Blog Challenge in April!
Come back daily for more exciting posts and even some giveaways!
Check out the 1000+ blogs on the list!

Welcome to Robert W. Walker, multi-published author of 40+ and counting books in various genres from mystery and history, to thrillers and horror, but most with a touch of the macabre. (Don't forget to read to the end for the contest!!)

Today, Walker shares some of his scary writing and talks about…

The ART of the SQUEAL
By Robert W. Walker

“Shall we dance?” Common sayings like that become excruciatingly frightful in a horror novel. A line from a popular song might be innocuous anywhere except when it comes flowing out of the mouth of a serial killer.
At a signing for this book, when I caught a sweet-looking elderly lady reading this opening to Vampire Dreams, I tried to soften the blow with a single comment. “Don’t worry, while the dog doesn’t make it, the kid survives.” She instantly pounded a fist into my table and exclaimed, “Damn, I hate children, but I love dogs!” Since then I have learned to never second guess a reader; they know what they like in terms of reading pleasure—and even more what they don’t like.
Still, it is my feeling that to avoid the mere, easy gross out, to go for the psychological and substantive frights and squeals, some things must be highlighted. The secret is in the meticulous use of detailing those highlights, and sometimes that requires a light of one sort or another—a blinding clean, white spotlight, or a grimy dim glow, a semi-lit room, candle glow, waffling candle light with a shiver of wind passing over… or a light bulb painted with blood, turned on to allow a serial killer to smell anew the odor of hot blood. Nasty detail, but the devil is in the details after all. 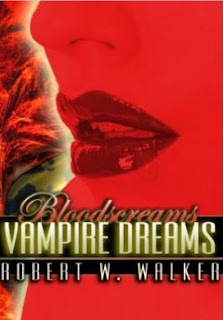 And in short, that is the Art of the Squeal. A good squeal pulled from readers comes too from the careful build up to the moment of displaying the creature or the cruelty of his/her acts, or the results of horrific events that cause us to look away and then look straight back again—straight into the abyss. Careful at the edge.
The slow build is of course enticing, and a large part of building to the frights so great as to hear those squeals from the readers. Here is another excerpt to show and I'll quit asking you to take my word for it. 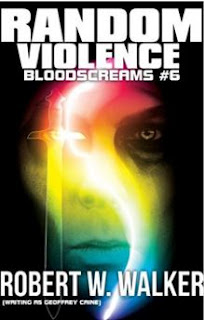 ** Excerpt: This is from my latest effort:  RANDOM VIOLENCE, #6 in the Bloodscreams Series:
Abe, impatient to finish clearing off every speck of earth from the ancient skull while thinking about the Greek and Roman depictions of the Minotaur—half man, half bull—got the idea that perhaps—just perhaps—he was holding the skull of a Minotaur in his hands, or at least what passed for one in ancient Canada. There had to be more like him, Stroud thought. “There has to be. What would a lone ‘minotaur’ be doing in a land not on any maps of the day?” Stroud also wondered if this creature walked on two legs or four…or if it crawled on its belly snakelike. A snake with a humanoid head and horns. It sounded damned biblical, but they would not know anymore until or unless the dig provided a lot more bones belonging to the nameless species. Until then, all was pure speculation.

While my Instinct Series relies on medical science vs. serial killers and features Dr. Jessica Coran, ME, FBI, my Bloodscreams Series features Dr. Abe Stroud, archaeologist and slayer of the supernatural creatures. In all my writings, I do all I can to triangulate at a minimum three of the five senses—five if I can pull it off, and some goodly use of the sixth sense when I can pull that off as well.

** Comment for the chance to win an ebook copy of either book --- and BONUS!!! Comment on why you like these characters for a chance to be named as a character in Robert's next book!!!!  Be sure to leave an email to contact you.