#AtoZ - Q is for Quick #Zombies

Today is the letter Q for Quick Zombies

When you think about zombies, do you envision them as quick or slow? Well, if you believe that the creatures are corpses that have risen from the dead, then you probably see them as slow. However, in 2002, that notion was turned completely on its head. 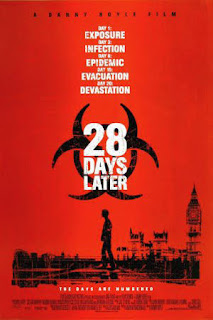 28 Days Later was the first film to introduce the quick zombie, and it changed the course of the genre. Not only did the undead have numbers, now they had the speed to come after the survivors. And that was incredibly scary. The slow zombies were a problem for humans because they had numbers on their side. Now they are quick and outnumber the survivors. Humanity is so screwed.

The quick zombie also drew a line in the sand with purists on one side—those who believe zombies can only be slow. They argued that since zombies are corpses and therefore rotting, there’s no way they would be able to move quickly. Romero’s zombies became the standard that all other creatures were held up to, and deviating from that trope was blasphemy.

Personally, I like both types of zombies. I agree with the corpse argument, but I think the quick zombie gets around that issue because it never really says that the quick zombies are dead. They are simply creatures who have lost their ability to think for themselves and are driven by primal instincts.

If the genre doesn’t evolve and progress, it will be forgotten. Quick zombies were the next step in zombie evolution. Who knows what the next one will be. Intelligence? Romero definitely proposed that idea in his later films...


What type of zombie do you prefer? Quick or slow?
Posted by Pembroke Sinclair at 12:00 AM