Today is G for Girl Zombie 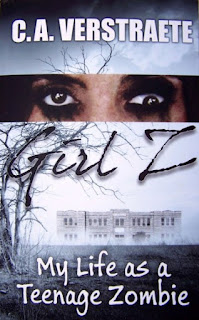 It's not every day your life is changed forever... and you turn part-zombie.

No, not the disgusting, walking dead, brain and flesh-eating kind. Instead, it's a 16-year-old girls's worst nightmare--changing into a  clumsy, half-decaying version of your old self with a twirling eye and a diet of weird raw and liquid protein.

That's the premise of my book, GIRL Z: My Life as a Teenage Zombie by C.A. Verstraete.

Writing Becca was a lot of fun, and now I'm giving her new adventures, letting her solve a few mysteries and getting a bit of a more "normal" life. Just a bit. But read below for a "taste" of the current one--and enter the contest!

(You can read her Thanksgiving adventure at Mystery Weekly online if you subscribe to the email story list. Another, longer story, has her facing some zombies and her greatest fear in the anthology, Young Adventurers: Heroes, Explorers and Swashbucklers.) Learn more at my website.) - See contest below!

** Here's an excerpt from GIRL Z: My Life as a Teenage Zombie:

"Spence?" I gasped, unable to believe that this wreck of a man in front of me was Carm's brother, my other cousin.
His clothes, dirty and in shreds, hung from his arms and legs like rags. He was skin and bones, but a shadow of his former robust self. Spence had always been a health nut. He used to eat odd organic stuff and lifted weights like it was his religion.
Now he looked old, beat, worn-out, sickly.
No wonder I didn't recognize him.
The unusual sores on his face and the color of his complexion gave me pause. What in the world happened to him?
"Carm?" I asked, my voice soft with worry. "Maybe we shouldn't touch him. We don't know what he caught."
She glared at me and then grew sad. "I know, but we can't leave him here. Maybe he got attacked by those things, the ones on TV. We have to help him."
I sighed, knowing she was right. Still, I hesitated.
He looked horrid, and if this was what happened when you came in contact with them. . . I shivered.
We shouldn't go near him, I suspected, yet we couldn't let him lay there and attract attention. Not much choice. Besides, I loved Spence too much for that.
Still uneasy without really knowing why, I pulled off my long-sleeved shirt and stood there in my tank top, glad it didn't get as cool as the weatherperson had predicted.
"Take off your shirt," I told my cousin. "Wrap it around your hands. We'll drag him to the porch. Once he wakes up, we'll get him inside somehow. None of us should be out here."
It wasn't easy.
We stopped several times, rewrapped our hands, pulling and dragging his body across the grass and down the cement walk. Dead-weight; it was like moving a ton of potatoes.
He never flinched or made a sound.
Finally, after several attempts to get him up the steps without smashing his head, we finished. Carm dropped his legs with a loud thump on the porch floor.
I put his arms down, huffing and puffing, trying to get my breath, and I was in pretty decent shape, or so I thought.
Carm wiped a hand across her forehead and took a breath. "Whew, that was hard. I'm going to get some water. Want some?"
"Yeah, I'm thirsty, too. I'll wait here in case he wakes up."
Once Carm left, it gave me a chance to look at Spence. I mean really look at him.
The good-looking Spence, the one I'd daydreamed about marrying one day, (before I knew about the first-cousin marrying ban, of course) was gone. In his place stood an old man. He'd added at least thirty more years to his twenty.
Whew. It was a lot to take in.
I couldn't help it and took a step back, glad Carm wasn't around to see my reaction.
The longer my cousin took to get her water (where'd she go, Lake Michigan?), the more nervous I became, especially when Spence moved around and moaned.
His fingers twitched. He kicked out a foot. He made a funny low growl.
Not good.
I took another step backwards and wondered what was taking her so long. "Carm?"
Where was she?
My attempt to lean back and peek through the doorway made me lose my balance and bang my arm on the door frame. I staggered, ending up where I'd started. From the corner of my eye, I saw something move and jumped.
Too late, I turned and took a sharp intake of air.
Spence and I gazed eye to eye.
He sat up, made another unintelligible growl, and grabbed for me. I screamed and yelled, but he stared straight ahead and right through me as if I wasn't there. My heart pounded so hard I swore my shirt fluttered. I panted, getting more frantic, as he scratched and clawed at me.
"Spence, stop-stop!" I yelled. "Carm, help!"
The minutes felt like hours. I didn't know how much longer I could keep him at bay when my cousin ran in and yelled.
"SPENCE, NO, STOP!"
Finally, he did, then he peered at me and back at Carm like he didn't know either one of us.
Oh, this wasn't good.
To her credit, Carm took his attitude in stride and tried to get her brother's attention. "Spence, it's me. It's Carm, your sister. Spence?"
She prodded him again, though I could see the heartbreak in her face. A minute later, he groaned and mumbled what sounded like "sorry" before his eyes rolled back and he slumped into a heap.
"Quick, Carm, let's pull him inside before he comes to again." I rewrapped my hands and grabbed his feet when Carm gasped.
"Bec, your arm! You're bleeding!" ...