#AtoZ - T is for Trust No One #zombies

Today is the letter T for Trust No One 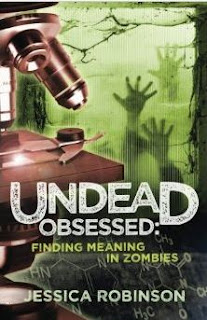 From Chapter 14 of my book Undead Obsessed: Finding Meaning in Zombies:

IF ZOMBIE FILMS HAVE SHOWN US ANYTHING, it’s that a zombie uprising would be swift and devastating. We would be caught unprepared, and most of us would either die or become the living dead. Civilization and life as we know it would come to a crashing halt, and those of us that are left would be standing there with our mouths open trying to figure out what happened. Survival is all that matters, and we would have to do whatever it took to make sure humans don’t become extinct.

Scientists are often to blame for the dead rising to consume the living, whether they are created by something from space or pathogens or an experimental serum. Scientists may be the cause, but they are definitely not the cure. Scientists can’t figure out how to rid the world of zombies, so they become useless. If they can’t help in the zombie apocalypse, then the next logical place to turn to is the military. After all, they are trained for situations like this—maybe not for zombies exactly, but other high-stress destructive situations—and they have weapons. But as many films show, the military is just as ineffective as science against the undead horde. They often become power hungry and corrupt. As Chapter 7 points out, the military has also had a part in the rise of zombies through the creation of biological weapons.

What zombie films do is take our trust in authority figures—science, the military, and the government—and twists it to show how degenerate these entities can be. They remind us that these factions are created and run by humans, so they are fallible and open to corruption. But the other thing zombie films point out is the determination and survivability of common folk. They show that formal training isn’t necessary when it comes to defeating the undead, but a little common sense and the ability to work with others goes a long way in ensuring the human race doesn’t go extinct.

It is abundantly clear in zombie films that the authority figures can’t be trusted. They are either the cause of or are completely ineffective at ridding the world of the undead threat. They are often power hungry and willing to do whatever it takes to be in control of everything. What this all boils down to is that humans are their own worst enemies. The system breaks down once zombies have risen. There is no more government or military, so why are we still fighting with each other like there is? Surviving should be the only thing that matters, but we can’t let go of our petty issues with other humans. We see an opening to “make things better for ourselves” and we jump to take it, not caring if we step on others in the process to achieve that goal.

This notion is apparent in every zombie film, including those where the zombies are created by magic. In White Zombie, Legendre turns his enemies into zombies so he can control them. In I Walked with a Zombie, Jessica is turned into a zombie because she was threatening to tear the family apart and needed to be controlled. In The Serpent and the Rainbow, people who oppose the leadership are turned into zombies so they can be controlled. Those with power do what is necessary to stay in control. Just because a zombie is created by other means doesn’t mean the goal of the survivors is different—they still want to be in control.

This notion becomes even more important when the world spins into chaos. Having control of your environment is important to give you a sense of purpose and meaning. If that is gone, how do you make sense of the world? How do you know where you fit in the scheme of things? The survivors in zombie films are attempting to make sense of what is happening and are trying to figure out what their role is in the new world. The problem is that they are using outdated ways of thinking. They are trying to cling to notions that existed in the world before zombies destroyed it, which could mean vying for a position they weren’t allowed to have before, and that generally involves needing to obtain power.
Posted by Pembroke Sinclair at 12:00 AM

Email ThisBlogThis!Share to TwitterShare to FacebookShare to Pinterest
Labels: a to z blog challenge, pembroke sinclair, t is for trust no one, undead obsessed, zombie films