#AtoZ - R is for Romance

Today is the letter R for Romance

It seems counterintuitive. I mean, the whole reason for a zombie novel is for there to be carnage and death and destruction and blood and guts. Zombie novels exist for there to be rotting flesh and people dying horrifically. If zombies have risen, that means it’s the end of the world and the characters should be more concerned with surviving than finding love.

For the most part, I agree with all of this. That’s part of the reason I find zombie books and films so intriguing. It’s mindless. It’s escapism. It’s predictable.

But on the other hand, zombie books and films are so much more than the gore. They show us what it means to be human.

Life After the Undead follows a lot of the same tropes you find in other zombie stories: the undead have risen and destroyed the vast majority of the human population. While they are a huge threat, they aren’t the only ones the survivors need to be afraid of. Other survivors are just as dangerous. 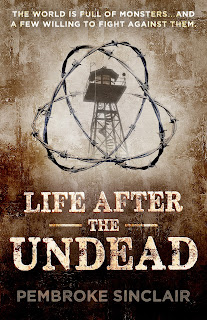 This idea isn’t new. Night of the Living Dead, along with all of Romero’s other films, highlight this notion. Ben and Barbara are content hiding from the zombies in the farmhouse, but then they discover that there are more survivors hiding in the basement. When these folks come upstairs, that’s when things go awry. Mr. Cooper desperately wants the gun that Ben has, and he is willing to fight to get it. All thoughts of working together get thrown out the window (or left on the porch—if you’ve seen the movie, you’ll know what this means), and this leads to people getting killed.

The Walking Dead excels at showing how corrupt and devious other survivors can be. The zombies are dangerous and have to be avoided, but so do other humans. I mean, they are downright terrifying. At least the zombies are predictable, but the other survivors are devious and conniving and can’t be trusted.

When it comes to zombie stories, most of the time the stories aren’t about the zombies. They are merely the catalyst that thrust the world into chaos. The stories are about how the survivors cope. And more often than not, they don’t cope well. With the world at an end, this brings out the worst in humanity. There’s always a fine line between the zombies and the humans and who the monsters really are.

These are exactly the same types of themes I explore in Life After the Undead. Humans are corrupted and power hungry, and zombies are the reason the characters are in that predicament. There are survivors who take advantage of other survivors for their own gain, and there are those who fight against zombies to ensure survival.

What? Ewwww! In a zombie story?

I know, it seems weird, right? But there’s a reason I put it in.

First and foremost, we humans are incredibly social creatures. We have a large network of family and friends that we interact with on a daily basis. Because of the internet, we have been able to connect with people all over the world. We may not ever meet them in person, but there’s a relationship there nonetheless.

We don’t thrive well when we don’t have our social connections. Sure, not all of them are healthy or uplifting, but we have to have them. We have to be connected to other humans in one form or another.

Most zombie stories highlight these unhealthy and domineering relationships. They show how destructive and cruel humans can be. In Life After the Undead, this is highlighted by Krista’s relationship with Liet. It’s also embodied in The Families.

These types of relationships are destructive and depressing. Isn’t it enough that zombies have destroyed the world? Why do the humans have to take advantage of others as well?

I strongly believe that not everyone is inherently cruel. I believe that humans have a huge capacity for compassion and empathy, and I try to show that through the good relationships that Krista has. With all the death and destruction, Krista needs to know there are people out there who are still good, that she can have a connection with. And she gets that with Quinn and Pearl.

Krista is tough, strong willed, and completely capable of taking care of herself. She can fight zombies and stand up to her cousin, but she’s also still human. She can’t thrive without connections. Her relationship with Quinn may seem to some to be rushed and without a spark, but it’s honest. She needs someone who can be her equal and her partner, and he fits that bill. As a 17-year-old girl, Krista is still a bit naïve when it comes to romance and love—and yes, her world has been turned upside down by the undead—so her relationship might not start and grow the way it would in a non-zombie-infested world, but it’s still important for her humanity.

Relationships are complicated even when zombies aren’t thrown into the mix. And when you’re a teenager, they can be downright confusing. Everyone has different expectations and experiences with love and romance, and not all of them happen like they would in fairy tales. Krista does the best she can with the life she’s been given.

We all expect something different from our zombie stories, and we don’t have to like everything that happens in them. The point of stories is to make us ask questions and to give us the feels—whether those feels are good or bad. When it comes to my zombie stories, I like to explore the question of what it means to be human. And part of my answer is that my characters have to love.
Posted by Pembroke Sinclair at 12:00 AM

Email ThisBlogThis!Share to TwitterShare to FacebookShare to Pinterest
Labels: a to z blog challenge, life after the undead, r is for romance, zombie stories