#AtoZ - K is for Stephen King

Today is Day 13 of the 7th Annual A to Z Blog Challenge.

What better than K for Stephen King? 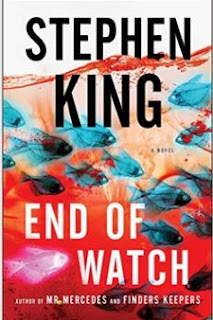 He'll be touring for the release of End of Watch, book 3 in the Det. Bill Hodges trilogy (after Mr. Mercedes where the detective tracks a serial killer,  and Finders Keepers (which I have to read yet.)

King will be touring for the new book. Check his website for any changes. Too bad, nothing out in the Wisconsin-Illoinois area.. yet.


The format for these venues will be on-stage conversations and there will not be a book signing. Stephen will be pre-signing 400 books for each store that will be given out randomly at the event. More details will be released as they become available.

Email ThisBlogThis!Share to TwitterShare to FacebookShare to Pinterest
Labels: a to z, horror, king