#AtoZ - W is for Wrath #horror

Today is W for Wrath 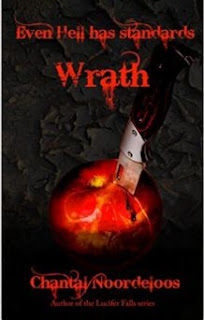 About the Book:
“Fatima Oni never had a chance for a good life. Born into poverty, her hopes of anything better are dashed when she’s given away as a child bride to her abusive uncle. Her days and nights become a living hell on earth, and things grow from bad to worse when Fate rips her children away from her. Can she keep turning the other cheek when faced with the ultimate loss, or will she give in to the wrath that boils inside her and take her fight for retribution to Hell and beyond?” - Even Hell Has Standards: Wrath

By Chantal Noordeloos
What on earth possessed me to start a series about human darkness? I’m not going to lie, the Even Hell Has Standards series will probably be one of the most difficult things I will ever write. Whenever I come up with these stories I cry bitter, ugly tears, curl up in a ball, hugging my own arms, and curse myself for needing to write this. I promise you, my heart is not made of stone, and I take no enjoyment out of tormenting my poor characters.

And yet… they have stories I need to tell. I think with Even Hell Has Standards—more than anything I’ve written so far—I have a point to make. So, I travel into the proverbial depths of Nigeria—from the safety of my computer and imagination—and face the reality that somewhere out there, there’s a girl like Fatima Oni, who leads a life that makes me lose faith in humanity… and I tell her story.

The whole series started with this image I had in my head of Lucifer. I won’t give too much away about his character, I’ll let you read that in the books. Through him I formed my own version of Hell, which inspired me to look into the human horrors. We all—myself included—like to write stories about monsters, ghosts, or even serial killers. I wanted to dig deeper with this series, and touch upon the taboo topics that make us uncomfortable.

The scariest part of my book? Not Hell, or any of the supernatural parts I put in it… but that I’ve based parts of it on reality. The poster I describe in the doctor’s office exists, as do the horrible conditions that some of these child mothers have to deal with. These young women have stories that set the hairs on the back of my neck on end.

My only hope is that despite the bleakness of this novelette, I still manage to entertain. No, that’s not true, it’s not my only hope. I also hope that my writing will ‘touch’ people (in the non-physical sense), and that will make them think. It’s my desire to create stories that the reader can’t just walk away from, but that will mull over in their minds and maybe even change their lives… even if it’s such a small change they barely notice it. I guess I’m just ambitious *wicked grin*

Even Hell HasStandards: Wrath is the second novelette in the series, following Pride. Each story is written as a standalone tale, but they do strengthen each other, and I recommend that if you like one, you read the others too.

* Hear Chantal narrate her excerpt or read it below.
** Don't forget to comment to win an e-copy of Wrath. Be sure to leave an email to contact you.

Wrath
“Mama?”
Ikenna sounds faint and far away to me. The high tones of my child’s voice are muffled by the rushing sound that throbs in my ears. My heartbeat is fading, and I’m sickly aware of it. I try to lift my arms to console my son. It takes effort to open my cracked, bleeding lips—they’re a mess from when I took a fall, but the pain is nothing compared to that of my shredded abdomen—and I try to tell Ikenna to run, but only a faint rasping escapes my battered mouth.
His ten-year-old arms are so warm against my cooling skin. I feel them even through my numbness and pain. His tears run down my face; I’m hyper aware of every part of him that touches me. There is love in this child, and I need to be a mother to him now, but I can’t. My limbs refuse to move, and I am without words.
Large, dark hands the color of coal grab my son’s shoulders. Everything seems to move in slow motion as the hands pull Ikenna away from me with brutal force. I watch my boy’s arms and legs shoot out toward me—trying to hold on to me—as he’s lifted into the air. His face is filled with fright. All I can do is lie here and watch him being taken away by this man. This monster.
Instead of saving my son, I’ve made him an orphan. The people I tried to rescue him from have won. In the back of my mind, the darkness stirs. I would’ve let it win this time—giving in to the anger and the violence—but I’m dying; I’m too weak to do anything.
My vision blurs as something blocks out the sun. It’s a different man. I recognize him; he’s the one I stabbed earlier. The sleeve of his shirt is torn open. Slick blood covers the fabric and the skin underneath. To my satisfaction, I can see the wound I gave him is a mess of raw meat. Yet it’s not enough to stop him. If only my knife had found his chest or throat instead of his arm... if only I had given in to the rage I had felt at the time… if only I had shown him my wrath, just that once. If only….
Lord, I will forever be your servant, but now I wish I would have broken your rules. My darkness could have saved my son.
The man’s speaking to me, but I can’t concentrate on his words enough to make out everything he says. The world around me seems fluid, and I tread the border between this world and the next like a tightrope dancer. The sounds the man makes morph in and out of words, but I pick up just enough to get the meaning. The hatred and contempt show on his face and flow from his lips. I can almost see myself through his eyes—the bloody heap on the floor. To him, I’m barely human. To him, I’m like a dog that has bitten him; perhaps I’m worth even less. I’m only a woman, after all.
Tears run down my face, not because of what this man is going to do to me—I am not afraid, not anymore—but I cry for my son and my daughter. I cry for the life I wanted to give them but couldn’t. I cry because I failed.
My tears stir a rage in the man, and a heavy boot connects with my jaw. A blinding pain turns my vision black. I feel my teeth break, tearing my gums open. More blood fills my mouth, hot and salty, mixing with my saliva.
Inside, the darkness stirs, rearing its head against the sense of injustice that overwhelms me. I am to die for the sins of another. My death will help no one. It will leave my children doomed. My daughter will be raised by her loveless father, and Ikenna… who knows what will become of him?
I glare at the figure that leans over me. He’s speaking to me still, but I don’t care. The darkness inside is too strong now, and I respond by spitting blood into his face. Bits of my broken teeth bounce off his pockmarked skin. He shouts, kicking me in the face again. Then he takes a step back. I assume to wipe away the blood. My blood.
Within a few seconds, his figure blocks out the sun. He kicks me again, in the ribs this time, and the pain shoots through my body. Ribs crack, muscles tear, skin bruises. He kicks again, and again, but I’m fading, floating away from the torment. I have no more fight left in me; even my inner darkness is being lulled by the agony. All I can do is wish for a swift end.
The man above me lifts his foot and holds it there for a few seconds so I can fully appreciate what he’s going to do to me. I’m not shocked, not after what I’ve seen the men do to women who disobey. I’ve seen worse.
His foot rushes down onto my face. My nose breaks with a wet crunch and an explosion of agony wakes me from my lull, blinding me completely. The bone splinters, ripping through the skin, tearing it open wide. Hot blood bursts out and runs over what is left of my face. The second time his foot comes down, I feel the skin on my cheek and jaw split open, igniting another fire that threatens to overwhelm me. The third time, I feel my skull cave in under the pressure, crushing my brain. My body is dead, but somewhere in the depths of it I still exist. I know, however, it’s time to let go of this life.

Email ThisBlogThis!Share to TwitterShare to FacebookShare to Pinterest
Labels: a to z, hell has standards: wrath, horror